ACCIDENTS ARE IDENTITY BY ATIVANDAL IS OUT NOW !
Album and merch available at the High Kick Records Bandcamp page 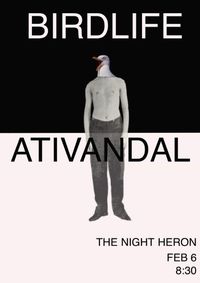 Join us for an evening of gorgeous songs sculpted from acoustic instruments, electronic boxes and impassioned voices. Free show! 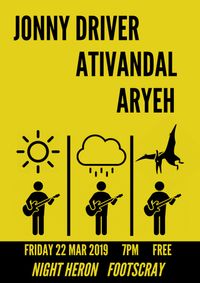 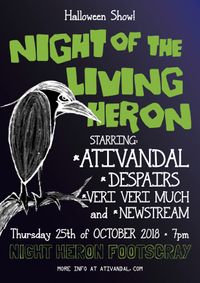 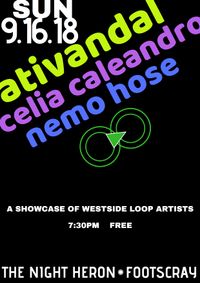 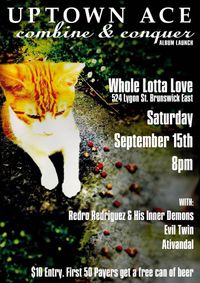 Ativandal plays support for Uptown Ace as they launch their new album at Whole Lotta Love in Brunswick. Also appearing Redro Redriguez & His Inner Demons and Evil Twin. First 50 in the door receive a free can of ice cold Young Henry's beer. Ativandal kicks off the show at 8:30pm. 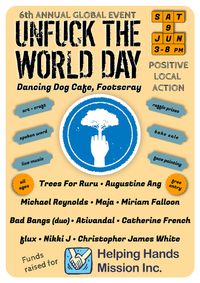 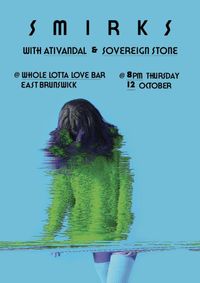 Ukuleles, drum machines, shoegazey guitars, beards, beer, audio nerds, sexy geeks, deep fried potato items, decibels and a whole lotta love. Be with us. Be part of our show. Together we will conquer Thursday night in brutal fashion. xxooo 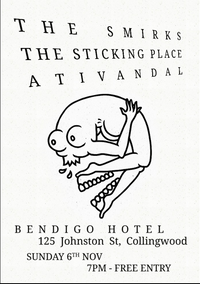 The Smirks/ Ativandal/ The Sticking Place

I'll be supporting the fantastic Smirks at the Bendigo Hotel in Collingwood. 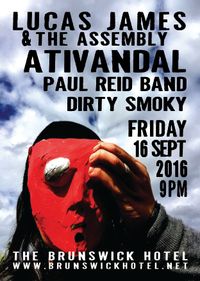 I'll be supporting Lucas James and the Assembly on their debut gig. Paul Reid Band and Dirty Smoky round out a fantastic Friday night line up! 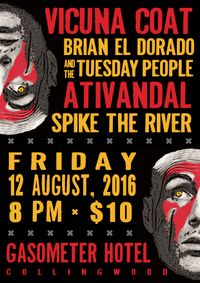 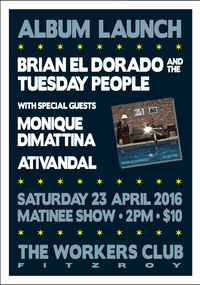 Celebrating the release of Brian El Dorado's diverse new solo album Eclectric! This is a Saturday matinee show. Tix are $10 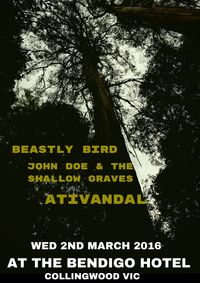 Ativandal performs a 30 minute set at a songwriter showcase at the Purpl Emerald. 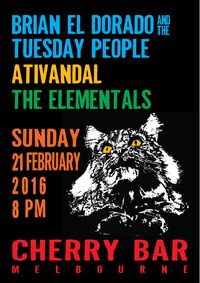 I'll be supporting Brian El Dorado who is out to promote his magnificent new release Eclectric at the famous Cherry Bar in the Melbourne CBD. Special guests The Elementals will also perform.

I'll be performing with some fantastic Melbourne songwriters at the cozy Open Studio Bar in Northcote. $5 bucks at the door. Best show in town for chump change! 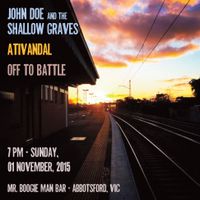 Ativandal, John Doe and the Shallow Graves, Off To Battle

I'll be supporting the delightfully dark John Doe and the Shallow Graves with special guests Off To Battle in the Northern Melbourne suburb of Abbotsford for my first long set since moving to Australia in September.

Ativandal at the Luxor Lounge

Impromptu gig at the lovely Luxor in East Brunswick. More performers TBA. I go on at 7pm 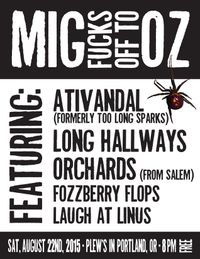 Yep, I'm outta here. Going to take on life with my wife in the gorgeousness of Melbourne, Australia. I'll probably be back someday but for now, I must bounce across fluffy clouds to my new home at the bottom of the globe. So, I'm inviting all of my friends and family to send me off proper with a night of fantastic music, beer and a performance by yours truly on stage at Plew's in Portland's St. Johns neighborhood. This is a free show and it's 21+ over.

Ativandal at the Freak and Tweak Variety Show

too long sparks, Helena Cinema at the Firkin

Back in Portland to play the Firkin with Helena Cinema https://www.facebook.com/helenacinema Show starts at 7pm.

One year in Melbourne so far and what a ride. I've performed at some great venues and have met some really decent people. Melbourne Australia and Portland Oregon have a lot in common: a vibrant and hugely diverse music community, healthy art scene, culinary wonderland, long, grey, rainy winters, rampant gentrification, traffic...It feels just like home in that regard. The differences are both fantastic and curious. Lots of people from all over the world live in this city. People are crazy for rugby, Australian football, cricket and horse racing. In fact, the AFL finals and Melbourne Cup are state holidays and if you end up working those days you earn double wages. It's windy here, too. The weather, in general, is completely unpredictable and can go from sweltering to bone-chilling in the course of several hours. Political correctness is not the norm. People here will make casual comments and generalizations regarding race that would definitely be considered offensive and racist in the States. You get used to it. People, for the most part, are friendly and hospitable.
I've been writing lot's of music and studying audio production at university. My wife is working in pre-production for a large printing company and brewing beer. We still have yet to purchase a barbecue which is apparently very un-Australian. I figure, we are doing alright, regardless.

too long sparks is now ativandal

Yes, I changed my name. Yes, I know it's risky. I just feel the music has taken on a new identity lately and it was time for a change. Now, onward as ativandal...

I'd like to thank Sean Richardson and the music community of Charleston, West Virginia for making me feel welcome in their beautiful city. I've missed performing in such an enthusiastic and supportive music scene. I made some new friends and soaked up some of that southern hospitality everyone talks about. It's no myth. Folks were amazing. Thanks also to Pittsburgh and the Blue Moon bar for a great couple nights. We will be back!

Hi Ho Happy New Year.  Just sipping some hot tea and checking out a track by Kinski of Seattle.
https://soundcloud.com/kinski-music/let-me-take-you-through-my-thought-process
I'm anticipating a fantastic Mega Songwriter Blowout at the Firkin in Portland this Thursday. Hope to see you there.

Happy Thanksgiving, folks. Hope you're fat and hungover and ready for more holiday abuse.
I'm currently booking shows for the winter from Seaside, Oregon to Port Townsend, Washington with as many stops in between as I can manage.
Check back for updates and join my mailing list! xxoo

my studio is a functional disaster

I've been focusing lately on ukulele based songs partly because I love the compactness of the instrument and also because it has a much different character than the guitar. Who am I kidding? I love gigging with it because I'm lazy and it's small.  I'm developing songs right now that I can perform live using only the ukulele, a loop pedal and a few effects pedals. I'm getting some pretty good layers with this relatively minimal setup, using a newly added octave pedal to create some new textures. I'll have the results of my labor up on the site soon.